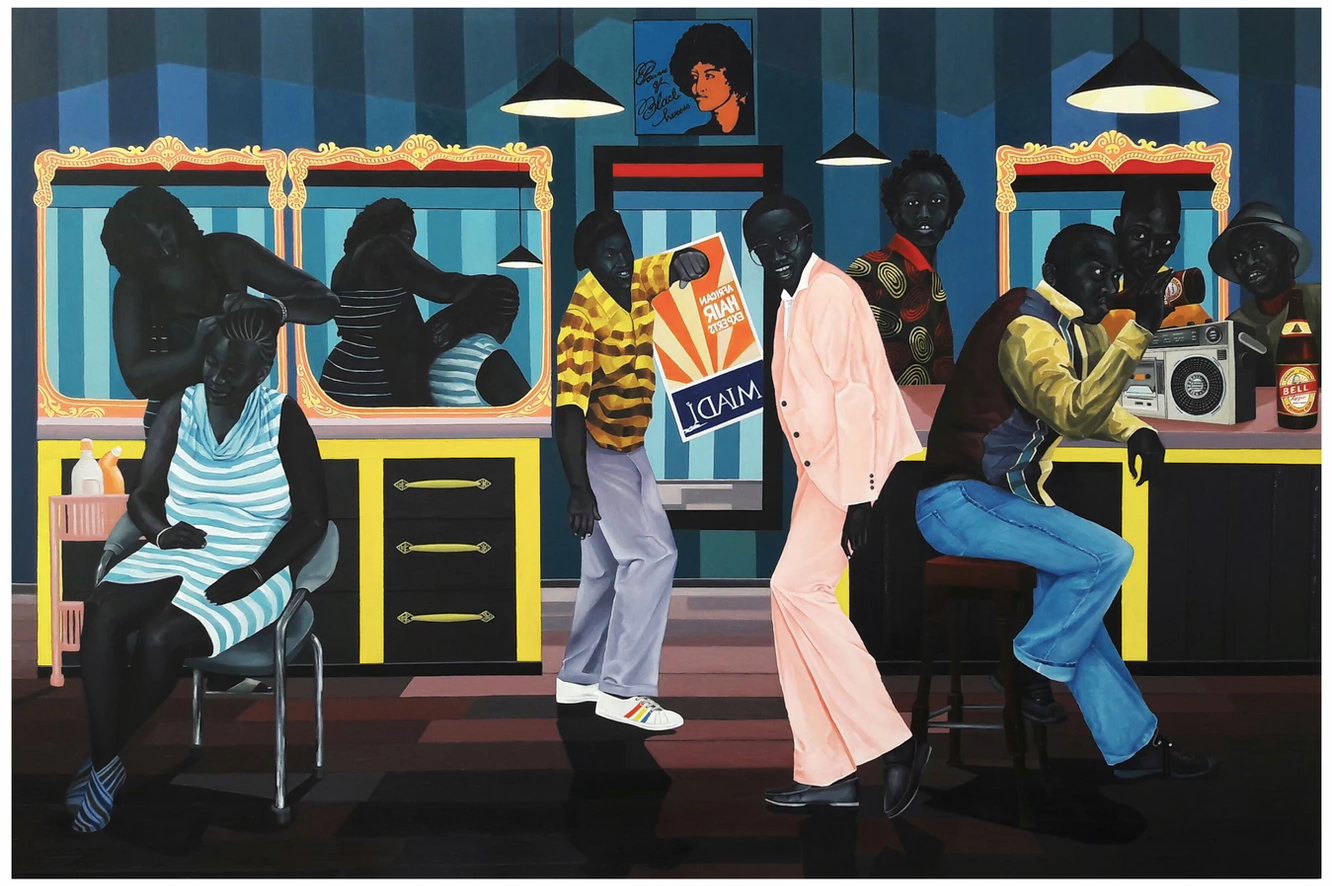 “What if the World is just about existence?”: Ian Mwesiga On His Journey as an Artist

“I had always believed that I was destined to be an artist,” says Ian Mwesiga. With Mwesiga now represented by Marina Ibrahim, reputed for working with Morrocan and Ghanaian artists, the conviction has paid off.

Graduating with a BA in Industrial Fine Art & Design from Makerere University, Uganda in 2014, Mwesiga has been participating in residencies and workshops that have been pivotal in shaping his career and craft.

Coming from a background where people didn't believe in a career in the arts he says, “I was just following my passion. I knew it was dangerous to follow things I was not convinced about. I’ve consistently been interested in drawing and painting, so I thought “Why change directions now?”

Starting in the Kampala art community which he describes as a small group without much structure, “The gallery was just one or two small houses where exhibitions happened,” he says.

“I would visit almost every weekend and find stacks of paintings gathering dust in the back. It made me wonder if this was the environment I was joining.”

Mwesiga believes a cultural ecosystem led by an expatriate community has damaged the sustainability of the arts. “It could lead to the extinction of the artists when their favourite buyer is no longer in town.” Its why he resisted the local performance because he felt independence was an issue when galleries received almost 90% of their funding from foreign sources. He says, “To expect independent discourse, free from the conditions is dubious. How is that decolonizing institutions? Even now several artists are being supported through that arrangement because that's all that makes sense to them.”

He feels like it’s a double-edged sword because while the institutions provide valuable contributions and facilitate conversations about art, there aren’t enough indigenous players in that space. When starting, Mwesiga questioned how Europe or America validated African artists.

“It’s not until they have a big exhibition in Paris, are they recognised,” he says, attributing it to the lack of formal structures in the local context to support artists.

“After leaving school in Mozambique, I was confused about how to begin shaping my work.” It was an accident which made him take a year off painting, that gave him the time to absorb what he had seen at the Uganda museum. With Walter Mingolo’s colonial theories, fresh in his mind, he began questioning how this was going to help him analyse his work. After that period, my mind was sharpened to analyse and read deeply into pictures.”

Comparing a previous visit to the museum, seeing those same pictures, and not finding anything problematic with them he says, “On revisiting them, I began to see all sorts of problems and wanted to do something about it.”

From his very first painting, he gathered his content and subjects from pictures that would inform his desire to create the right images. “Even now I am very analytical of images with people and how they are portrayed.”

Mwesiga’s work is discussed in the same breath as artists that focus on Black joy like Lynette Yiadom-Boakye and Carrie Mae Weems. “There are still people who can't comprehend that people in a certain continent have a certain way of life. When I encountered some images, I could see what the person behind the camera wanted to portray. So it was a reactionary approach saying this is not what it is. We don't want the world to continue believing that this is what a Black person is.”

Mwesiga counts himself no different from classical painters like Caravaggio. “I believe every artist whose images have lived on, represented something they knew. My images represent what I know and are my contribution to culture and history like my contemporaries. It's not a one-man job, it's a collective responsibility,” he says.

Mwesiga’s first painting, ‘School of Dance and Beauty’ from 2017 is unique in that it's acrylic on canvas when he now works in oil on canvas. “One of the ladies is an extraction from a photograph by Malick Sidibé. Now I use images from a diverse range, staging and making a composition that makes sense to me or anyone viewing it.” With a Marilyn Monroe reference in the background, he creates a contrasting backdrop for the dancing young ladies.

It’s the same joy that’s depicted in ‘Salon Kafunda’, an oil painting on a bigger scale “to introduce more diversity in composition.” He says the attempt to create a binary of genders came in after he had populated the painting with men, which he then found problematic.

His paintings also feature “unique impossible environments” like the salon in a bar with people dancing. “These are the impossibilities that are only afforded to an artist. You have the liberty to transform imagery in the direction you want. They're like dreams but you make them exist,” he says.

'In awe of the married couple’ depicts a black and white image inside a contemporary coloured image to portray two timelines within a single painting. The idea of working with black and white, as an idea of time makes him conscious about using it. It has an ambiguity similar to his ‘Bright Future’ with its subjects in what could be any space. The black and white image of Mandela on the TV and the book cover which needed a white background for the black typography and vice versa, that can't be separated from each other. Mwesiga challenged himself to do the miniature portraits in black and white with the golden frames symbolising classical paintings and nobility. “I was celebrating portraits of random people in condensed palettes. If that’s what makes those[classical] paintings important, then these paintings should be important too,” he says.

‘Woman with two lovers’ was referenced from a coloured image whereas he wanted it black and white. “The choice of palette was deliberate as is the arrangement and choice of the subjects.” He says it’s part of the language that he’s trying to develop and wants to identify himself with.

He explores his love for private spaces in his works like the 2018 ‘Man with a Glass Of Beer’. “I want my work to be surreal, but in a real sense, so I explore people existing in isolation, engaged with themselves. The windows, like in ‘Man Standing By The Pool’, is a metaphor for access, letting you into my space,” he says.

‘Basketball Player’ is a twin to his ‘Woman in Red Dress’ where his fascination with road signs began. “The sign showing a no turn and a one way gave two contrasting messages making it feel like this person was living in harmony with conflicting worlds,” he says. So he developed a series of paintings that were seemingly disconnected yet coexisted. By juxtaposing an urban sport like basketball against a rural Ugandan landscape, he aims to reinforce the same metaphor—of the coexistence of two conflicting messages.

His ‘Woman In Red Dress’ creates a conversation beyond the painting because of the deliberate cut in the side with the signs at the extreme end of the painting. “The photo free zone”, has a man with a camera, pointed at the viewer, making them the subject of the painting going beyond the frame and engaging. He views the signposts in his work as a creation of human beings, creating a world of instruction and order with their rules. “What makes it a photo free zone?” he asks.

Some of his paintings like ‘The Telephone Call’ feature Idi Amin Dada, the infamous Ugandan president. “Even with his toxic history, Amin remains part of Uganda’s history,” he says, discussing Amin’s other appearance in ‘Breakfast’ that ponders who we celebrate and what they represent.

“I wanted to create an image with elements from a typical African living room like the image of the Virgin Mary to create a dialogue about the complexities of religion in the bigger picture of Blackness and representation. The woman on the phone in the picture might just be posing because it is a trendy thing to be pictured on the phone,” he says.

‘Eve of Genesis’ and ‘Adam of Genesis’ are twin paintings except it’s Mwesiga’s Adam eating the apple. His penchant to rewrite narratives makes him ask, “What if Adam was the one who ate the fruit first?” He considers Adam to just be a random Black man. The paintings are meant to be facing each other to ensure eye contact but Adam is set against rolling hills and flowers, while Eve is against dry grass to show they aren’t in the same environment.

Mwesiga’s ‘People & chicken’, set against the backdrop of the view from his studio is based on his worry that the world is trying to make sense of everything. “The idea is to have people minding their own business, like the chickens. We can live in a world where what makes sense is not a generally agreed notion. That’s why everyone is looking in different directions,” he explains. “The give way sign replaces the one-way signs from the other paintings because they’re all asking for space,” he says. “Everyone is equal and no one is interrupting anybody's space.”

Mwesiga wants to portray his subjects in a diverse way like the ‘Black Diva At the Road Carpet’ whom he envisioned as a self-fulfilled person who fears nothing. In ‘Secret Conversations’, he places the window in a corner and a third subject: a shadow, depicting the presence or absence of someone even who’s not in the painting. “These are common scenes I used to see as a child; people engaged in a secret conversation with someone eavesdropping,” he says.

‘Man standing by the pool’ is an image Mwesiga took of his brother. “The shadow and the reflection in the water created three figures from one,” he says. “It’s a representation of hope, which is the creation of hopelessness.”

His paintings are filled with details like the texture of Eve’s hair and the flowers on Adam’s painting. “It's labour intensive but then you dive in and things just start working out—that's the joy,” he says.

“I've always challenged myself to see my paintings develop on a certain level, with the subjects, activity and minute details. I'm always analysing if this is critical and challenging enough for me?”

Mwesiga describes it as a battle within his studio to try and push the boundaries of his own paintings while dealing with a subject at hand. He says he fights himself to not make sense and break away from logic. “The world is all about what makes sense and what doesn't but what if the world is just about existence?”