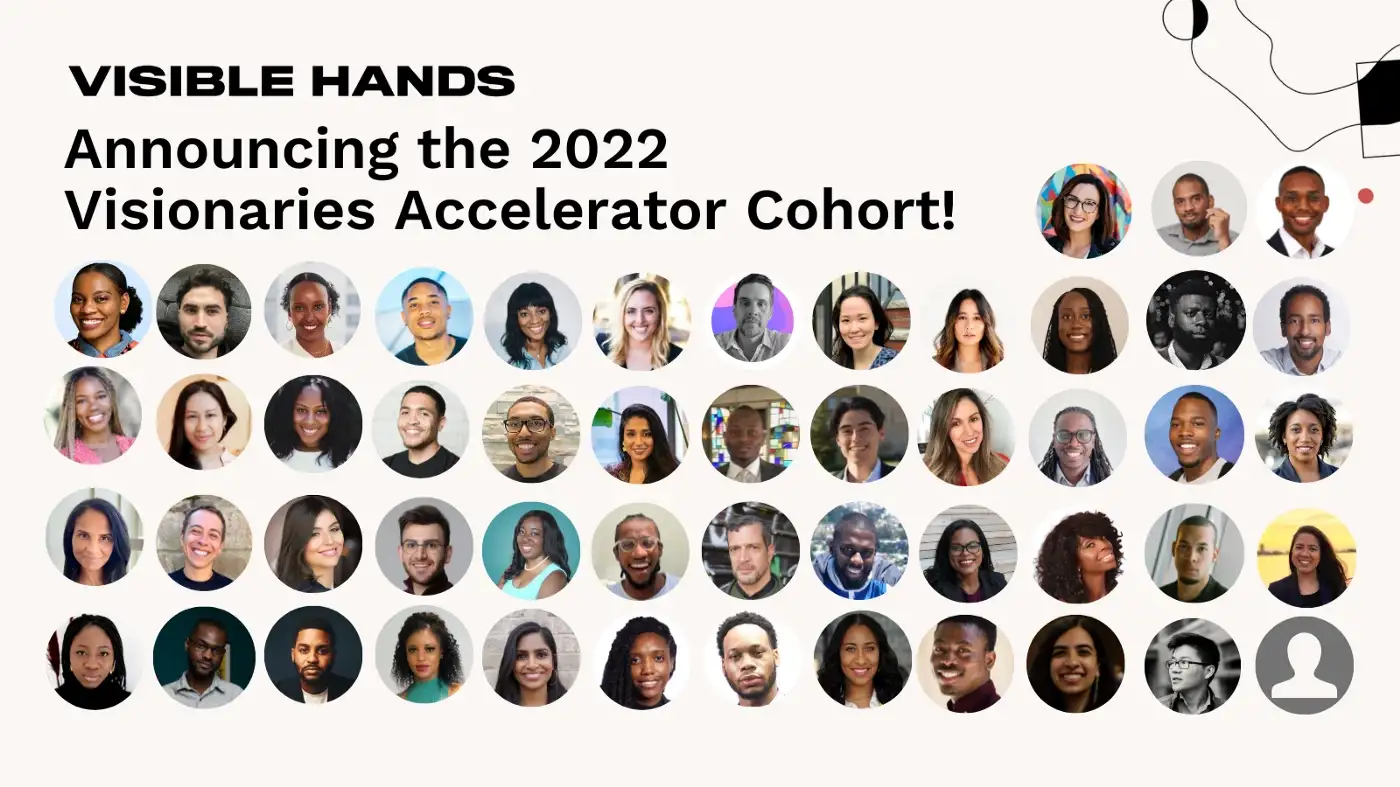 Visible Hands, a pre-seed fund that holistically supports overlooked founders, has officially launched the second cohort of its flagship “Visionaries Accelerator.” From September through December, 45 companies will work full-time towards building their startups, with hands-on company-building and financial support from the Visible Hands team.

The Visionaries Accelerator is a virtual-first program that annually supports overlooked talent in building technology startups. During this 14-week program, founders work with the Visible Hands team and receive personalized engagement plans, expert-led programming, and a supportive community of diverse founders at similar stages. Each founder receives initial investments of $25K at the start of the accelerator and will have a chance at earning additional investments of up to $150K from the Visible Hands team as they progress.

“We were astounded by the quality of this year’s applicants,” said Tia Thomson, Vice President, and Selection Process Lead at Visible Hands. “I was lucky enough to interview hundreds of founders throughout the selection process, and I was constantly reminded that these aren’t just amazing underrepresented founders — they are amazing founders, period. The process was competitive, with an acceptance rate of around 3%. With so many exceptional applicants, we had to make difficult decisions to narrow down to our final 51 Visionaries.”

This year, 1,418 applications were submitted, a 56% increase from their inaugural year. Cohort II of the VH Visionaries Accelerator consists of a highly talented group of founders belonging to historically marginalized groups working to change the landscape of their prospective industries and entrepreneurship as a whole. The finalized cohort of 51 entrepreneurs features over 70% identifying as Black, African American, and/or Latinx. Additionally, in the final cohort, approximately 53% of founders identified as cisgender women, 43% as cisgender men, 2% as nonbinary, and 2% as transgender men.

“Ultimately, we are extremely proud of the diversity in experiences, backgrounds, geography, and sectors present in our final cohort,” Thomson said. “We look forward to welcoming them into the Visible Hands community and working with them throughout the accelerator and beyond.”

Visible Hands’ Product Team will lead the charge on programming throughout this accelerator, to provide holistic support for overlooked talent intersecting with that of supporting the founders to gain insights and traction for their startups.

“Make no mistake, our accelerator will focus on the tactical components of company building from market validation to a go-to-market strategy to fundraising and many other topics,” said Visible Hands VP and Product Lead Nashaira Ofori. “We’ll just do it in a way that helps founders feel seen, supported, and surrounded, which for us means building out an accelerator that is planned with the unique experiences overlooked founders have in navigating the entrepreneurial ecosystem. This includes creating space for founders to focus on their wellness and avoid burnout.”

“Visible Hands has shown tremendous growth and impact as they continue to support underrepresented entrepreneurs in building innovative solutions,” said Liberty Mutual Executive Vice President and Chief Strategy Officer, Ann Stanberry. “We are excited to continue to be a part of this important effort that is making a difference in people’s lives and communities.”

Additionally, the Visible Hands program has seen rapid growth and success, which allowed the firm to secure partnerships with companies like Google for Startups and AWS to expand their efforts toward empowering underrepresented entrepreneurs and founders.

Recently, Visible Hands also announced that it closed an oversubscribed $10.5M for its Fund I. To date, Fund I has allowed Visible Hands to invest in 50+ entrepreneurs from its previous accelerator cohort, including teams like Noula Health, Parfait, Hearth Display, and more.

“We’ve reviewed thousands of companies over the past two years. Our rigorous investment process has allowed us to construct a portfolio of companies that are creating significant value and co-invest alongside other top VCs such as Precursor, Concrete Rose, and Serena Ventures, among others,” said Co-Founder and General Partner, Daniel Acheampong. “We are excited to invest and champion this new cohort of companies to further connect our capital with that of other investors and contributors as we push the ecosystem forward.”

Although a mostly virtual program, Visible Hands plans to kick off its accelerator program in mid-September with a week-long orientation in Tulsa, Oklahoma, in partnership with Build In Tulsa and Atento Capital of the George Kaiser Family Foundation. The cohort will gather in Tulsa to attend workshops, build relationships with their fellow founders, and learn about the significance of Tulsa in the history of economic inequities for African Americans in the US.

Read more about the participating companies.

Select a 3D scene, import your content, curate and go live in just a few mins!