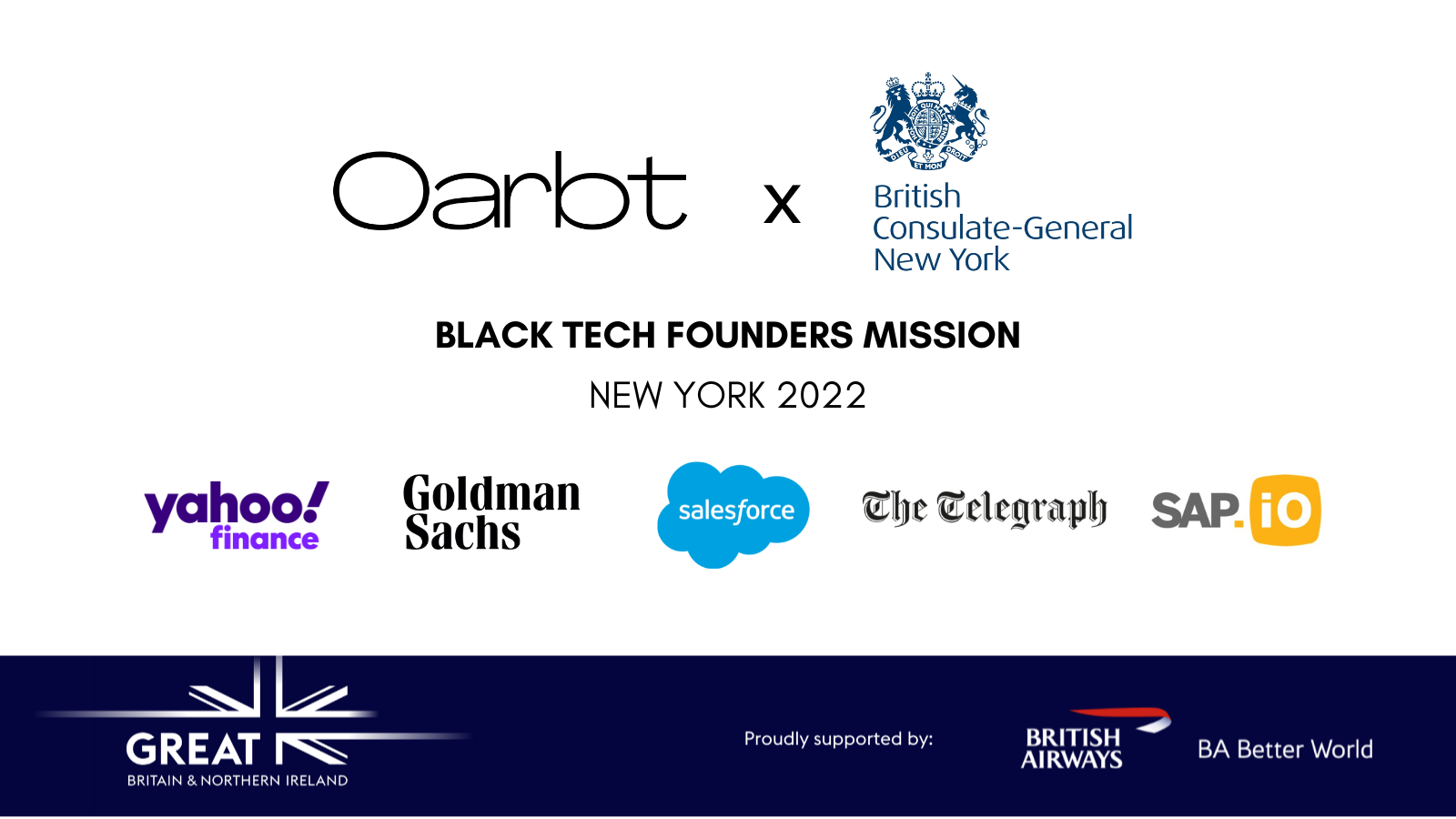 British Airways to fly founders in support of Mission.

Twelve unique technology firms, set up by Black entrepreneurs in the UK, will take part in the delegation:

The UK's flag carrier, British Airways, has partnered with the British Consulate-General in New York to fly the founders to and from New York in support of this mission.

The program offers UK-based, Black-founded companies the opportunity to explore the US tech ecosystem. Recognising the barriers Black tech founders face accessing venture capital, this mission will seek to elevate the founders' profiles to NYC based investors and the wider NYC tech community. The delegates will engage with over 100 US based venture capitalists through networking events, meetings, and a capstone pitch night.

The UK founders will also meet with their US counterparts to discuss the differences between scaling a business on each side of the Atlantic and the lived Black entrepreneur experience in the UK & the US.

"I am delighted to welcome this impressive group of Black founders to New York, who represent some of the most innovative emerging tech firms in the UK. According to some research, in 2019 just 2.9 percent of deals that UK VCs made had Black founders, and we must take concrete steps to reduce this disparity. Achieving more equal racial representation in the workplace is a top policy priority for the UK Government, and I am very pleased that this annual trade mission is making great strides in tackling this crucial challenge and we are determined to keep closing the gap."

Cornerstone Partners, an angel network focused on investing in exceptional Black and diverse founder led businesses across the UK, found sobering results in recent research. According to their findings, of UK founders who successfully raised VC funding in 2019, only 2.9% of founders identified as Black.

Despite the statistics, the selected cohort has collectively raised over $43 million USD, with AudioMob, an audio ad provider for mobile gaming, raising a notable $14million Series A in November 2021. The firms selected for this Mission are well positioned to expand into US markets. From Syrona Health, who have designed an app aimed at engaging and supporting all women in terms of gynaecological health, to Definely, which is demystifying the art of drafting, reviewing and understanding legal documents, the featured innovations in this mission are as diverse as the founders who created them.

"Transatlantic connectivity is vital for the UK's economic recovery. Part of building back the economy is investing in and supporting entrepreneurial talent, which is why as the UK's national flag carrier, we are delighted to be working alongside the British Consul General in New York to support these talented innovators to develop their networks and elevate their profiles on an international scale."

"At British Airways we champion diversity and inclusion and the UK Black Founders Mission aligns with our BA Better World programme and our commitment to creating a diverse and inclusive culture, that reflects the global communities we serve."

More information on the 2022 UK Black Founders Mission in New York may be found here.

About the British Consulate-General in New York:

The British Consulate General in New York maintains and develops relations between the UK and the USA. Our services involve handling a wide range of political, commercial, cultural, security and economic interests to the UK and our region. We provide services to British nationals living in and visiting New York, New Jersey, Pennsylvania, and Fairfield County in Connecticut.

British Airways is a British original; an expert in global aviation offering its customers more than 100 years of expertise. The airline connects Britain with the world and the world with Britain, putting customers and sustainability at its heart and providing service excellence. British Airways offers its customers choice, value and flexibility, with fares and cabins to suit every budget but a premium service for everyone.

British Airways is the largest airline operating at London Heathrow and London City airports and with a significant presence at London Gatwick. The airline proudly offers customers flights to more destinations from London than any other airline.

The airline has an extensive network to the US, offering customers flights to more destinations in North America than any airline in Europe, flying from London to up to 23 US airports with up to 246 flights a week, more than any other transatlantic carrier. The airline currently operates seven flights a day to New York City.

In September 2021, British Airways launched its sustainability program, BA Better World, its commitment to an inclusive, responsible company, a sustainable future and making a meaningful contribution to the communities in which it operates.

More details on BA Better World can be found here.

More details about British Airways' US routes can be found here.

View the announcement on Yahoo Finance.

Select a 3D scene, import your content, curate and go live in just a few mins!