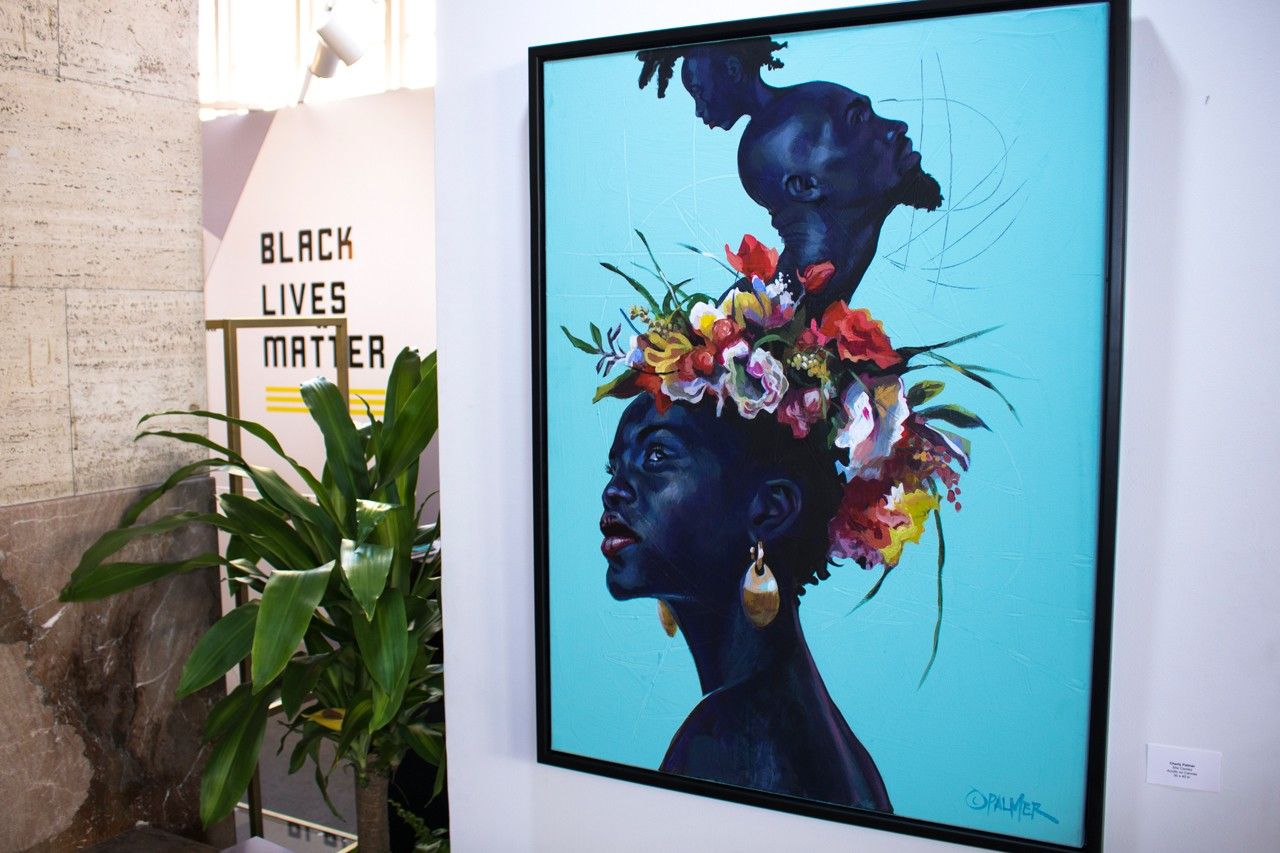 An idea for a fair that exhibits artists working with Afrofuturism was the seed from which Mikhaile Solomon founded PRIZM Art Fair in 2013. Now in its 7th year, PRIZM has evolved into a platform that showcases international artists from Africa, the African diaspora and emerging markets.

For Solomon, it’s been a journey through several artistic mediums to land up in a role that leverages all of her talents. With a background in architecture, Solomon channelled her interest in building things to develop PRIZM Art Fair into what it is today. As an “artistic dabbler”, she’s pursued dance, piano and even holds an undergraduate degree in theatre. Set design courses in her undergrad and her natural talent for drawing, put her on the path to an architecture degree from NYU. But graduating soon after the 2008 recession meant work in the construction industry was scarce. In 2011, she met a former mentor who she worked with for a while on artistic projects that inspired her to start PRIZM.

Solomon’s vision for PRIZM is to be a social commentary platform. It’s important to her that the artists’ work be a lens through which people can catch a glimpse of the world that we're currently living in. “I'm very interested in how artists articulate this snapshot in time,” she says.

To highlight the fact that art does not exist in a vacuum, Solomon tries to put the framework of her curatorial focus under a microscope and respond to the energy of the time. With last year’s theme, Love In The Time Of Hysteria, almost being an augury to the mood of 2020, she almost feels responsible. “I guess I have my finger on the pulse of things more than I know,” she says laughing.

Solomon is meticulous when it comes to selecting participants who are sensitive to the dynamics of our world. “Most of them have extremely reactive practices," she says referring to Lola Flash, whose work featured at PRIZM last year. She was wearing an astronaut's helmet and an orange jumpsuit—the helmet being a metaphor to protect yourself from the toxicity of the world and the suit that's associated with incarceration, asks questions about our freedom,” she explains.

Another artist Nguyen Smith, whose performance work she calls “goosebump raising”, featured in PRIZM 2017 with a piece calling out the US government for economically excavating resources from the Caribbean but not supporting the recovery efforts during natural disasters like hurricanes and earthquakes.

“I'm very interested in how artists articulate this snapshot in time,”

PRIZM also platforms new curatorial talent like William Cordova. “Back in 2017, we both had our own sections but then I suggested we do one together so it's been an iterative process. He works with a robust network of artists, so we're able to bring together a unique roster of talent every year,” she says.

PRIZM has previously worked with curators like Oshun Lane of the Rush Philanthropic Arts Foundation and Marie Vickles, the Director of Education at the Perez Art Museum in Miami, who worked with Solomon on the very first PRIZM Art Fair. “The following two years, I curated the entire fair myself but since then, William and I have been working the shows together," she says. So, figuring out how to work with curators has always been a part of her ethos.

Speaking about PRIZM’s new collaboration with tech platform Oarbt, Solomon says that the digital aspect has always been a priority. “In 2017, we started selling artwork online so it was on the top of my mind to go digital and COVID accelerated having to pivot to ensure that people could still access the fair globally.”

“The challenge for many galleries based in Africa, that we wanted to work with, was the difficulty and cost of shipping all of their wares to the States for a maybe one week period.”

The pandemic seems to have given Solomon more than enough impetus to focus on making sure that they had a strong digital platform. “When we go back to hosting PRIZM physically, I want to have a robust digital platform to supplement that,” she says.

PRIZM 2020 is set to be the biggest one yet, featuring up to 30 galleries. The digital approach allows a wider opportunity to platform new artists or galleries that PRIZM normally couldn’t before. “The challenge for many galleries based in Africa, that we wanted to work with, was the difficulty and cost of shipping all of their wares to the States for a maybe one week period,” she says. “If you don't make the bare minimum or at the very least break even, it becomes a challenge for galleries to absorb those costs.”

“I definitely see a lot more use of technology to facilitate events and the commerce that happens online around the arts will probably increase as well.”

This becomes far less expensive with a technology platform that allows you to upload your inventory and have people see your work from anywhere in the world. “It's allowed us to engage with new partners which explains the larger number of galleries that are working with us this year,” she says.

Solomon thinks this close collaboration between the arts and technology was “inevitable” saying, “Technology can help democratise the arts by providing technological infrastructure to ensure that artists get royalties from the resale of their work."

Calling the art world a “playground for the uber-wealthy”, she observes that the ones who are actually producing the asset that’s sustaining people's wealth are at a disadvantage. “It's a pretty predatory industry. So, I think that technology can serve to combat its exploitative nature by making it a lot less exclusive.”

Solomon also thinks it's well overdue that museums are deaccessioning their Picassos and Pollocks and acquiring pieces by female, black and Latino artists in the hopes to attract new visitors. “Museum collections have been overwhelmingly composed of white male artists. So, to sell some works to create collections that are more representative of humanity makes sense to me,” she says. “It will stimulate the entire community to start coming to museums because now the artwork on the walls will resonate with everyone and not just a few.”

She says this trend also gives a reason to think about how the leaders of these institutions and boards are selected. “You do need people who have discretionary funds to support a museum but I think the ethics that drive their daily lives need to be examined as well: who they invest their money with, where they're getting their money from etc.”

PRIZM has partnered with some powerful movements that have similar visions like Black Lives Matter, whose co-founder, Patrisse Cullors is a performance artist herself. “We think about how art can be a catalyst for social justice. Even the various installations of the Black Lives Matter logo on streetscapes throughout the country is the use of artwork to drive home an important message,” she says. Another perfect collaboration was Black Art in America that has been instrumental in making Black artists household names for the past 20 years. Solomon has also worked with The Africa Center, that focuses on connecting Africa to the world, through public diplomacy.

“Technology can help democratise the arts by providing technological infrastructure to ensure that artists get royalties from the resale of their work."

Setting the agenda for each year is a continuous ruminative process for Solomon. “Every year after the fair, I take a month’s break to think about next year's fair. I do studio visits with artists and a lot of times, the curatorial focus comes from conversations, my readings, and the daily news. So I spend time doing research and from that, comes the curatorial statement.”

This year’s curatorial statement came from a conversation with Cordova. “He came up with the title Noir Noir: Meditations on African Cinema and its influence on visual art. So I spent time researching film, watching a lot of movies that I'd never seen before and developed the statement, making sure it fits within the context that we're living in right now.”

“Museum collections have been overwhelmingly composed of white male artists. So, to sell some works to create collections that are more representative of humanity makes sense to me.”

PRIZM has also had some prolific keynote speakers over the years like the CEO of Africa Center, Uzodinma Iweala and Deborah Willis. “I like to think of Willis as the godmother of the art world as she's been extremely helpful in supporting the upward trajectory of so many artists,” she says. Last year’s Love in the Time of Hysteria had Tiana Webb Evans, the founder of ESP Public Relations speak with Bahia Ramos, the Director of Arts for the Wallace Foundation, about art as an extension of love and where we can find love in the arts.

With the art market heading towards a new normal, Solomon predicts a shift in how events are produced. “I definitely see a lot more use of technology to facilitate events and the commerce that happens online around the arts will probably increase as well,” she says.

For Solomon, it’s the uniqueness of having a different focus every year that makes her look forward to next years’ fairs. She says: “The challenge of having a different framework every year by which to guide the creative direction is always the fun part. Whilst I'm thinking about this year, I'm already thinking about what the focus will be for next year.” But she tries not to plan things out too far in advance to keep it relevant to the times. “I give myself time to think about each year differently; it's like doing a new thesis project every year. This year more than any other has taught me the importance of being agile,” she says, referring to the disruptions due to COVID-19.

PRIZM Art Fair has changed both the art scene and Solomon personally. “I have a more granular understanding of art since before I started PRIZM,” she reflects. Now, she’s always on the lookout for artists; travelling to visit them and understand how their work is shaped by our existing social constructs.